Ok, so the weird looking "inside out alien thing" in the photo below is not the mangled remains of a crashed extra-terrestrial UFO pilot, its origins are from much closer to home. 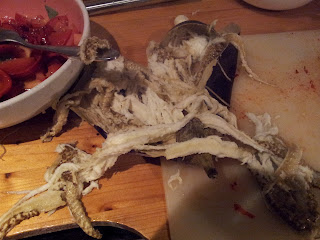 ﻿﻿﻿﻿﻿﻿﻿ Believe it or not this is what an aubergine looks like after its been baked in the oven for slightly too long and explodes﻿﻿﻿﻿﻿﻿.

Not really too sure what went wrong, but  I guess it was in the oven a bit too long, and we should have probably put a couple of holes in it to release the steam, but we didn't, so when it came out the oven it exploded with a loud "POP" scattering its tentacle like innards all over the chopping board.
The noise was so loud i heard it from a another room, and actually thought the oven had exploded as it sounded  just like an electrical explosion..

But look at it! its hideous, it really does look like some kind of exploded squid or alien creature.... but mixed with some garlic and blended down, it still tasted great :)