Whats the Keyboard Shortcut to lock my MacBook Pro Retina?

So Apple claim that Mac OSX is "the worlds most advanced operating system" but after using it for a couple of weeks, i would have to disagree. Simple things that I've taken for granted on Windows operating system for many years, just dont seem to exist on OSX/Apple.

Take for example the ability to lock your workstation. In most workplaces, IT security policy states that you must not leave you workstation unattended and unlocked for fear of unauthorised access. In Windows Microsoft have kindly provided the convenient shortcut "Windows+L" to lock your workstation. Press these two keys, (with one hand!), and you can walk away from your machine safe in the knowledge that one of your joker work colleagues wont be able to send your resignation to your boss from your unlocked workstation!!

Apple on the other hand, seem to have forgotten this basic security need. apparently on older Mac Books, if you press the the rather awkward combination of Shift + control + Eject (requires TWO hands!) you can lock your workstation, but the new MacBook Pro with Retina Display that i bought recently doesn't have an Eject button as it doesn't have an Optical drive!!

Its no secret that I've never been a fan of the Apple iPhones. When they first came out, i could never understand why people were getting so excited about a phone with a non-replaceable battery, and low resolution cameras when every other phone on the market was able to make video, and had a removable battery!

Moving on a few years, and still the iPhone craze continues. Aesthetically the iPhone has come a long way, and even i would now admit that they do look nice, but I still don't feel that even the new iPhones 5 is really that "cutting edge" when compared to its rivals.

So here is a link to a nice comparison that i found. See what you think!!

Time For a New Garage 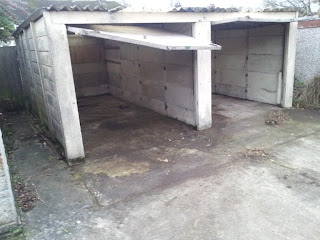 My old sectional concrete garage is looking a bit tired, and the asbestos concrete roof is crumbling and falling apart. In fact i've never once put a car in there in fear that the door might fall off and smash the car to bits. Whats the point in a garage i dont dare put my car in???  it has to go!

The concrete base is in good condition, so i've been looking into getting a blockwork garage built on the existing base, with flat, felt covered roof.
I've had a few quotes from local builders, but so far all seem to be astronomically high for what is essentially four single skin block walls and a plywood roof!

Having looked at the quotes, the problem seems to be the labor costs, so now i'm looking at concrete prefabricated concrete garages...