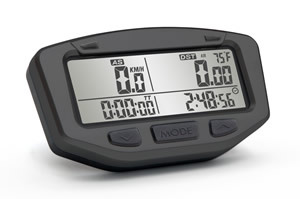 The OEM speedo on my KTM300 exc was looking a bit tired.
When i bought the KTM it wasn't even working, so i replaced the internal battery, and managed to get some info showing on the screen, but no mater how hard i pushed, the Function button just wouldn't work, so i decided i would scrap the OEM KTM digital dash and replace with a brand new Trail Tech Vector Stealth.

Trail Tech do a range of digital dashboards for bikes (Vector, Vapor, Striker and Enduro II) but i settled on the Vector Stealth because it has the option of the Remote Switch which allows you to operate the unit without taking your hands off the handlebars.

I placed the order last night, so its not arrived yet, but as soon as it arrived i'll post my thoughts on my new little gizmo!